Photo of the week – Africa rewards Composure and Intensity 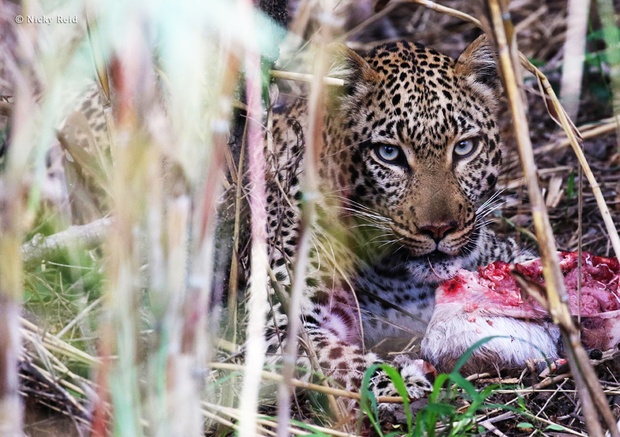 With this stunning image of a leopard and its kill, one cannot help but be in awe of the intensity of these predators once again.  Calm and composed, but intense and focused, a sighting of these perfectly adapted animals is the epitome of any African experience.

This image was recently taken by Nicky Reid, one of our guests at Indlovu River Lodge.  She was part of the photographic workshop by Master Your Camera.  The workshop was hosted by Denni Raubenheimer and Yolande van Niekerk Raubenheimer.  Here follows Denni’s account of their time at Indlovu:

“The past three years have seen me and Yolande spend a significant amount of time in nature reserves with clients.  In descending order (time-wise) this was mainly in Rietvlei, Dinokeng, Mabalingwe and Pilanesberg nature reserves.  Although visiting the Pilanesberg for multiple days always stirs up much excitement, no previous photographic guiding excursion had us as excited as we had been about this past weekend’s wildlife photographic workshop at Indlovu Bush Lodge.

Indlovu Bush Lodge is situated inside the pristine Karongwe Private Game Reserve and roughly between Hoedspruit and Tzaneen.  They can be described as a luxury big five safari lodge with a focus on providing visitors with an intimate and private lodging experience.  They have also adapted themselves to cater for the photographic safari market with a specialized photographic safari vehicle and two sunken photographic hides.  No self-driving is allowed and good protocols are adhered to by lodges in terms of game drives.

The one thing that had everyone slightly concerned was the weather forecast. Overcast weather and some drizzle were predicted for much of the weekend.  All participants were however willing to brave the weather and low light and none of us were left disappointed.

After initial greetings Yolande had the clients for a presentation on composition in wildlife photography (I had made sure to have my initial technical intro with the clients prior to the workshop).  Hereafter, there was a quick lunch and then I was off with the clients for a first session in the mammal-photo-hide. This turned out somewhat disappointing with only an adult male Nyala and some birds quenching their thirst in front of us.  The antelope that were nearby seems wary and it turned out that a stashed leopard kill very close to the hide was the reason.  This also explained all the game viewer activity that we had been hearing close to the hide.

We all soon forgot about any lack in luck around the camp fire and made sure to fatten up on the three course meal for the next day’s activities.  I did not taste the complimentary house red, but the complimentary white wine was really nice.

The next day was the cloud-break in terms of luck.  Yolande left on a morning game drive with the clients at roughly 06h30 (later than usual due to overcast conditions).  And what a game drive this proved to be.  Three different leopards in one drive (a first for driver and tracker, Jonty and John) all of which provided descent photo opportunities, as well as Karongwe’s confiding adult female Cheetah on an Impala kill photographed on foot (leaving the game vehicle is allowed when John and Jonty deem it safe)! I’ll let the photos do the talking…

Read more about their experiences in next week’s blog – “Vulnerable but utterly cute!”