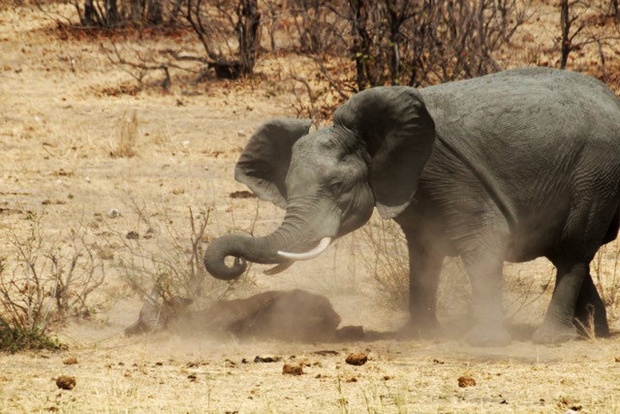 An elephant killing a buffalo calf?  Read more about this strange event that was captured by our guest Stefan Harmse.  The whole sequence of photos was published on our Facebook page on 29 April 2016.

“I had the privilege of witnessing the event on 9 October 2015 at around 1:10pm. The video however only portrays a part of the fascinating event.

I was traveling from Letaba to Shingwedzi when I noticed a large herd of elephant at a watering hole next to the main road. The elephants, conservatively estimated at approximately 50, although it felt more like 75-100, were playing around the watering hole and drinking water. It was a scorching hot day. As I turned off the main road towards the herd of elephant, two dugga boys crossed the road in front of us towards the watering hole followed by a lone buffalo calf. At the time I did not think there was anything strange about this although in hind sight I should have realised that the calf, which appeared very weak as can be seen from the photo of the calf drinking water, in all probability lost its mother and was now following the two dugga boys around. The dugga boys with the calf tagging along approached the watering hole with considerable caution and to the dismay of the herd of Elephants started to drink some water.  They were however soon chased away by the adult elephants. The dugga boys decided to rather play it safe and move on.  If the calf was with its mother at the time they would in all probability not have been in the presence of two lone dugga boys in the first place and secondly would have moved off whith his mother when she did. That was however not the case and the calf however turned around and came back for some more water.

The video clip shows how a single young bull mauls the calf where in fact he was not the only elephant participating in the event. A number of the younger bulls started chasing the calf away form the watering hole. The photos’ shows the sequence of events that led to the eventual death of the calf. I managed to take some shots of the elephants not only playing and drinking at the water hole but the the actual killing of the calf. I however missed the shot where the young bull after mauling the calf, picked it up with its tusks and hauled it into the air. This was mainly due to my 7 and 6 year old children who were at that stage beside themselves and were begging me to start the Landy and leave the scene. Needles to say that the children immediately deleted all photo’s of elephants from their ipads and Elephants being demoted to the bottom of the list of favorite animals.

I never imagined that my first real kill would be that of a buffalo by a herd of elephant. It was an extraordinary and amazing sighting to say the least.

If not killed by the elephants the calf would in all probability have been killed by a predator sooner than later.

One lady commenting on the video clip compared this to hunting and asked why the elephant was not subsequently put down. You can’t do anything other than just laugh at a comment like that.

I think all that can be said about the incident is always expect the unexpected and that is what life is all about in the Kruger Park.

Can’t wait for my next trip. Who knows what nature will serve on the viewing menu.

Luxury self-catering on a Big 5 reserve