Photo of the week – Vulnerable but utterly cute! 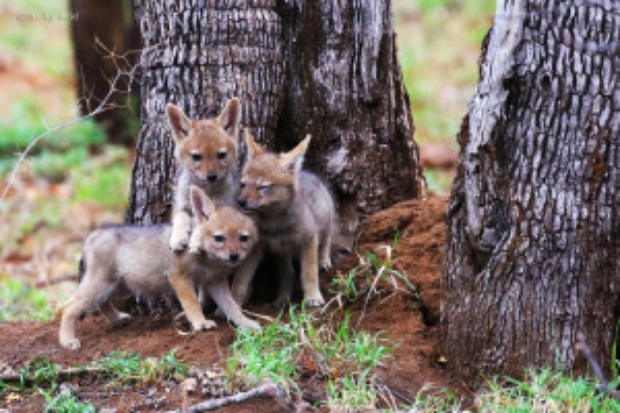 This heart warming photo is the follow up from last weeks post – “Africa rewards Composure and Intensity”.  Our guests were the keen photographers attending a workshop by Master Your Camera.  On their first afternoon drive, they were thrilled with a once-in-a-lifetime sighting of three different leopard sightings on one game drive.

This lovely photo on the left however, was taken by Nicky Reid on their second afternoon drive.  Their photography session was again lead by Yolande van Niekerk Raubenheimer.

These four very cute Black-backed jackal pups were playing around their den, while their mother was away hunting.  The vulnerability of the pups, as well as their playfull intelligence in knowing to stay close together and near the den, was a beautiful portrayal of the wisdom of the wilderness.  The highlights of the rest of the afternoon’s drive included a large adult lioness leaving her place of rest just as the game vehicle got to her, a herd of Cape buffalo that weren’t all very excepting of the vehicle (read mock-charge).

In between drives the guest photographers were spoilt with delicious food, had some time for relaxing and had photo evaluation sessions with their teachers.  Yolande also gave guests presentations on composition, which greatly enhanced the quality of their photos.

After getting back all three participants’ final selection of top-five photos, they were edited and the workshop ended with a friendly show and tell of everyone’s top five photos.

Says Yolande:  “Back in the city and we all have great photos, but I hope the super experiences of the weekend stay vivid in our memories until we one day depart”.