Photo of the Week – Why do giraffes have horns? 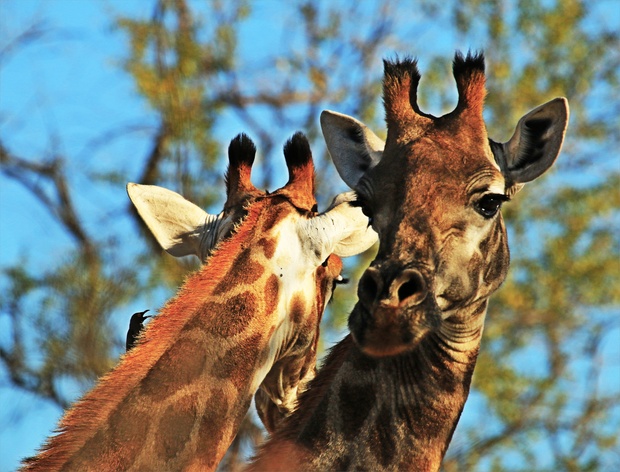 This image was recently taken by one of our guests at Indlovu River Lodge.  It made us wonder again – why do giraffes have horns?  Here is the answer – we don’t really know! 🙂

There are some theories and speculations though.  It’s likely that the horns of the giraffe are an example of what Steven J. Gould called “spandrels” — structures or adaptations that served as a support for some other function. In the case of giraffes, biologists know that the ancestors of giraffes had antlers, much like deer. Antlers are made of protrusions of bone which are shed and regrown each year. The giraffe’s

“horns” however, are not antlers — they are permanent outcroppings of bone from the skull, called “ossicones.” Giraffes are born with them, and they are covered with hair (except for adult males, who wear away the fur at the end). A best guess is that the giraffe’s “horns” were originally support structures for their antlers — sockets that supported the large racks which deer find so handy during mating season in their tests of strength and dominance. To speculate a bit, as giraffes grew taller, and their necks thinner, the violent frontal assaults of the mating ritual would have become dangerous. Instead,

giraffes joust by wrapping their necks around each other (pictured at right) and banging the back of their skull, and sometimes their forehead, into the skull of their opponent. For this purpose, giraffes additionally have bony protuberances above their eyes and at the back of their heads — just visible in the illustration above. But this method of fighting renders antlers at the top of the head useless — as you can see, the horns remain pointing more or less into the air. There’s a strong chance that it was partly because of this that giraffes lost their horns.
But it is possible that the bone structures which supported those horns were not lost so easily — resulting in ossicones.
Thus, the “horns” of the giraffe may present a strong example of a structure which no longer serves a purpose, because the antlers these horns were meant to anchor no longer exist. Gould loved to talk about such “spandrels” because they provided evidence of evolutionary by-products, evidence that creatures are not designed from the ground up, but adjusted and shifted over time. Sometimes, spandrels find a new, secondary function. And it may be that the horns of the giraffe do have some new purpose which biologists have been unable to suss out as yet. But it may be that they are evolutionary flotsam — illustrations of the odd side-effects produced as evolution fiddles with a few thousand genes in order to produce the wild variety of physical forms we call life.
This article was adapted from the original at http://whitesouse.blogspot.co.za/2007/05/why-do-giraffes-have-horns.html
Share This Post